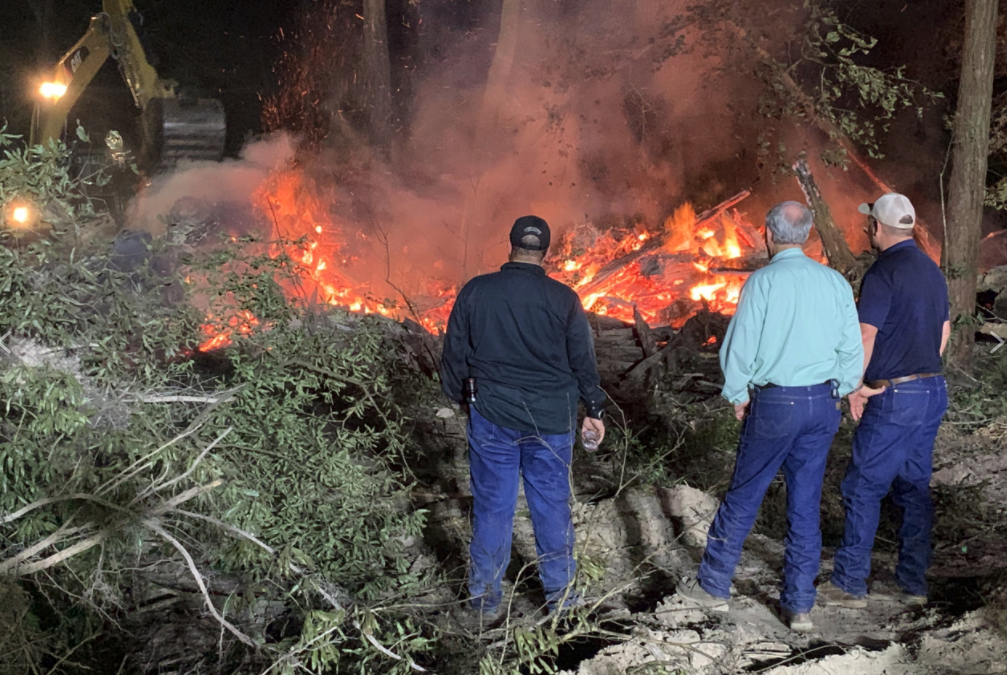 Just after 8pm, Porter Fire Department responded to a woods fire on Holly Ridge Drive off Sorters Road. When they arrived they found a large illegal burn of about one acre in size. The landowner had cleared land close to a year ago and pushed it onto a large pile.

Due to it being so dry, the fire burned with extreme intensity. With the wind blowing embers were landing in surrounding trees starting additional fires. Porter Fire Chief Carter Johnson contacted Pct. 4 Commissioner James Metts just after 9 pm for assistance. Metts responded to the scene and seeing the danger of spreading onto the neighborhood he called several of his employees in to respond with an excavator. Just after 10 pm, the excavator arrived on the scene and immediately went to work cutting a fire line around the large blaze. The operator cleared brush and many trees, some as tall as 60-feet from the area around the fire. Around 2 a.m., he had completed the fire line and then started a trench around the blaze.

Chief Johnson said this was the second such fire in weeks. The first one was in Summer Hills which depleted resources and took almost 100,000 gallons of water from the community water system. Tonight’s fire, he explained, would have taken the same amount to extinguish. However, unlike the prior fire, no fire hydrants were available nearby.

With a firetruck holding about 3,000 gallons of water additional tankers would have had to been called in from other departments to assist leaving parts of the county short of equipment as it would have taken 30-40 tanker loads of water and again drained another community water system. Johnson said with Porter Fire and Commissioner Metts working together, the fire was unable to spread, and additional fire resources were not needed. In addition, the hot humid conditions the firefighters would have had to endure most likely until well after daylight.

As for now, the fire is being monitored and will be allowed to burn out. Contact was made with the State of Texas and the Montgomery County Fire Marshal.