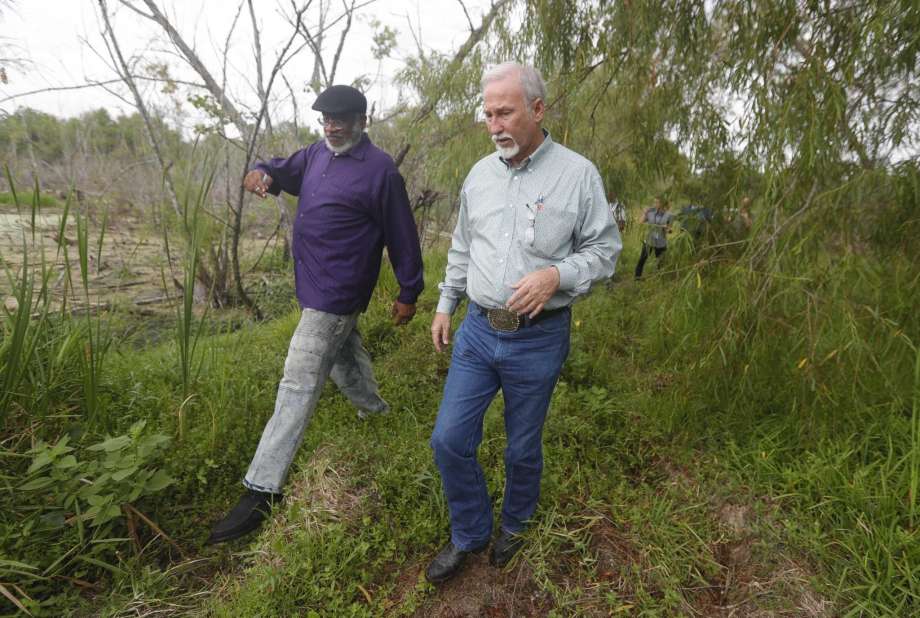 A once completely submerged cemetery nestled in a post-Civil War Freedmen’s settlement near The Woodlands has started to drain. Now phase one of the restoration process for Tamina’s Sweet Rest Cemetery can begin.

The site visit turned into a hike through green scum and tall cattails emerging from the overgrown, swamp-like graveyard.

“This is just wrong what is happening out here,” Metts said as he walked away disappointed in the poor conditions. “As Mr. Easley said, no one is pointing fingers here at anyone as to why this has happened, but it is time to do something about it. It is drier now and I want to use whatever power that I have as a commissioner to help this situation and I think that we can do that.”

“We can certainly do better than is being done here,” Metts continued. “These are taxpayers out here in Montgomery County and they deserve the same level of service as anyone else would and I am going to do my part to make it better.”

The board is close to completing the process to install two historical markers for both the cemetery and the community, which Easley hopes to unveil soon.

Roberts is involved with researching chronic flooding on African Ame

rican cemeteries, including the case of Sweet Rest Cemetery, which is one of 557 freedom colonies established throughout the state between 1865-1920, according to information provided by Easley about the research.

Sweet Rest Cemetery holds nearly 260 tombstones dating back to the 1870s. The burial ground serves as the final resting place on earth for former slaves, Native Americans, military veterans, police officers, and several residents of the Tamina community, including the colony’s founders.

Among the founders whose names can be found on street signs throughout the community, include Easley’s grandfather, Romie Hollins Sr. Tamina’s history can be traced back to R.B. Smith, an educator from the city of Montgomery, and John Nilor, a Houston-area businessman; and to 1871 when freed slaves who had moved to the area helped build the railroad in the area. Many past Tamina residents worked for Grogan’s Mill.

Easley said the last cemetery’s last burial was held in 2005. Since around then, due to the

impact of chronic drainage and flood issues including during Hurricane Harvey, families have been hindered from paying respects or being able to be buried with their loved ones.

In 2018, The Courier observed graves peeking from nearly two feet of murky water as the Nonprofit Tamina Cemetery and Community Development Corporation began spearheading an effort to restore the cemetery.

By May 2020, the board had worked with engineer firms, developing partnerships to raise money to get the water removed, and had developed a strategic plan for improvement. Easley still needed the Montgomery County commissioners to help address the issue.

The corporation held a Memorial Day tribute to remember those buried in the cemetery, hoping Sweet Rest would not be forgotten again due to the novel corona virus pandemic. Not a single grave was

during the tribute due to the worsening conditions and high standing water.

While the water has began to drain during the drier time of year, the grave of Amy Terry’s late Native American Great Grandfather, Rivers Terry, who was buried in the cemetery in 1981, remains inaccessible.

“Every time I come down here, I am very overwhelmed with sadness,” Terry said after digging through the growth to read other headstones. “You kind of prepare yourself because you know what it is going to look like and it’s just kind of in your face. But today, even though it looks like it is in really bad condition to anyone who has not seen it before—I am very hopeful and motivated that this is actually underway.”

“I am very grateful for the county stepping up,” Terry said. “But to also see that miraculously that some water has already drained, and we saw some headstones, it’s just great to see and great to know that the process is under way.”

l. Metts plans to look at county funds that he understands, by law, could be used to help the historical cemetery.

However, he was not able to provide a dollar amount and said he would have to review the limits with the county attorney.

d Easley hope the drier conditions will provide an opportunity to act with the next steps in the process, which include to completing a survey to establish the exact location of the property lines. Then, the hope is that someone with ground penetrating radar can be able to locate any unmarked graves. Easley said the cemetery has been assessed, however more funds for the GPR.

“We will prayerfully be able to move forward with ground penetrating radar, the cataloging of the graves, the removal of the final water that is in the cemetery and securing the grounds,” Easley said. “That is what I pray will come out of this. And, the finalization of our survey.”

The commissioner also plans to talk to nearby properties to take a further look into factors that may be contributing to the drainage issue.

“I don’t want to falsely accuse anyone, if that is the case that would need to be looked at,” Metts said. “If there is someone blocking a waterway or outflow to this cemetery, I think we need to look at that and

see what we can do to get that opened back up. Whatever that may be, whether that may be politely asking them or to take some type of legal action. The water is down now so we want to investigate that.”

Memorabilia is still being collected for a time capsule that will document the history, restoration effort and those who were involved in saving Sweet Rest Cemetery.